“For now, we just have to make it to tomorrow.”

It’s hot here—brutally hot. I was outside for just ten minutes, and the sun is already having its way with my skin. Seeing as we intend to work aboard a big metal boat with limited shade, this doesn’t bode well. And, after all the excitement of the ballet, the jet lag seems to have finally taken hold.

This morning was a genuine comedy of errors. We’ve both been sleeping poorly, but I didn’t realize how out-of-sync I felt until I stumbled out of bed, and proceeded to drop my electric razor—it’s broken beyond repair—then stub my toe on the door. We did feel better after coffee. But when we arrived at the theatre to sign our contracts, we realized we had forgotten our passports, and so had to hike back to the apartment to retrieve them. One of us (who will not be named) almost forgot his passport twice. By the time we returned with passports in hand, drenched in sweat, the registry had closed, and we were told we’d have to try again tomorrow.

We’re adjusting, slowly, despite the growing pains. The people here are warm, generous, and curious about what we’re doing. On the grand tour, we discovered that Marin, our host, has an enviable capacity for multitasking. Throughout our first meeting he was making calls—switching between Croatian, Italian, and English—to connect us with various personnel. Of course, being the General Manager of the Theatre, he was also putting out fires left and right. In addition to the three hundred and fifty employees he manages, he is also directing the opera “Aida,” which is set to play at this outdoor theater in July:

In spite of all this, Marin never seems to complain. We, on the other hand, are distraught that there’s still no WiFi at home. For now, we’re mooching off of café internet. We can at least connect in the Theatre. But of course, there’s no A/C in our office. Also, the room is filled with pianos.

“Chin up!” we keep saying. But trying not to melt is harder than it looks.

A petite middle-aged woman is barking at people in Italian. Grown men cower in fear at this five-foot fireball in a red dress. In a harsh whisper, she excoriates them for the way they improperly roll the r in guerra.

“She’s the Chorus Master,” Marin tells us. He says she used to work with Pavarotti (yes, the Pavarotti) among countless others. When he introduces us at the break, she immediately drops her guard and collapses into an audience chair. “I’m only mean when they’re lazy,” she assures.

“Aida” deals with serious issues—war, slavery, unrequited love—but the drama off-stage is turning out to be equally enthralling. Rehearsal happens in the three aforementioned languages. Four, if you count the erratic gestures Marin makes to the performers as they sing and try to remember their blocking at the same time.

After the rehearsal, we grab a well-deserved drink. We’re sure we’ll get onto Galeb by the end of the week, once we’re registered and all of our paper work is processed. For now, we just have to make it to tomorrow.

It’s midnight by the time we finally arrive back at our flat. This time, I insert the correct key into the correct keyhole and hear a satisfying ca-chunk. 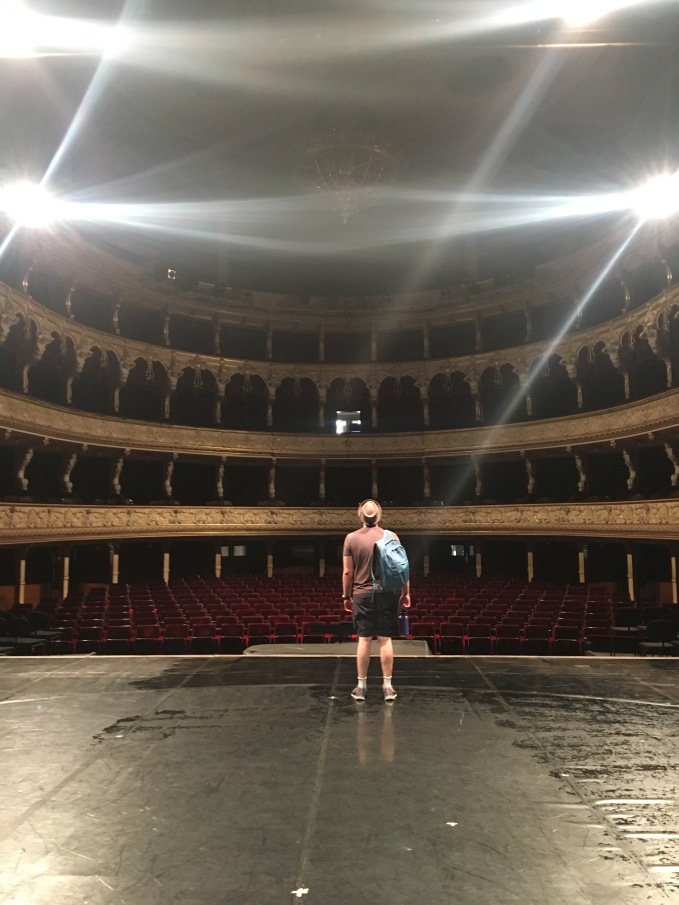