“It’s easy to confuse one for the other.”

Don’t worry; we’re not dead (and yes, Kim still has all of his limbs). We’re feeling more alive and invigorated than ever. Now the real work of WRECKED begins. Here’s a recap of what we’ve been doing and thinking about over the past few days. We don’t mean to brag, but we’ve covered a lot of ground.

We’re darting through the narrow streets of the old city, trying our best not to slip on the slick marble. But the rain is coming down in sheets, and my new shirt is officially soaked. Tonight is the opening celebration of the Theatre’s summer festival, in which our piece will be featured. The general consensus is that, due to this atrocious weather, no one will show.

By some stroke of miraculous fortune, the rain has stopped and left us with a merciful breeze. Hoards of people are pouring into the Theatre. Only some, however, enter through the front door. Tonight, the public will use the artist’s entrance. 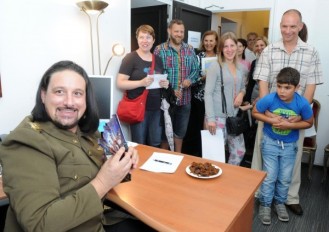 Guns, severed heads, and lines of cocaine are laid out on tables for all to enjoy (props, mind you). Ballerinas float through the grand foyer. Singers and orchestra members warm up in their dressing rooms. They leave the doors open. Folks of all ages line up for costume fittings and makeup. Five-year-old girls sit next to eighty-year-old violinists on stage as the orchestra plays through a classic score. In the office of Italian Drama, the Italian company manager is making a pizza.

Marin, our host and illustrious General Manager, has titled this evening “The Theatre That Breathes.” The concept is simple: invite the public to see what happens inside every single space within this massive old opera house—every space, that is, except the auditorium. The event is free, and anyone who wishes to walk in, can. 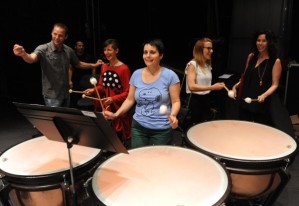 No one dreamed the event would be such a success, Marin included. “Can you believe it?” He whispers to us, grinning madly amidst the travelling mob. “That man just got up on stage and started conducting!”

After the week we’ve had in Rijeka, we can, actually, believe it. If there’s anything we’ve learned about this place, it is that here, the boundary between art and life is remarkably fluid. It’s easy to confuse one for the other.

There’s a large, balding man smoking a cigarette on the rock wall behind me. He’s completely naked. Kim and I are drinking whiskey from the bottle. Nataša explains to us that this quiet giant is the resident oddball of her friend group. Having spent four years at a liberal arts college in the woods, I’m feeling right at home.

People keep referring to us as “the foreigners.” I find the blunt edge of their English refreshing. Everyone at this party is an artist. I reflect on how hard it is to talk about big ideas with people when you share such a limited vocabulary. I take another swig.

Along the beach is an an enormous cliff face with a steep staircase carved into one side. On the hike back up, we all have to stop to catch our breath. Across the bay, the city lights are dancing on the water.

The bus ride took longer than anticipated—we stopped in Slovenia for doughnuts—but the schnitzel I ate for dinner made the trek worthwhile.

We’ve come to Vienna with the cast and crew of “Klotho,” a brand new Opera by Polish composer Martyna Kosecki. The opera will prove disappointing, but our thirty-six hours in this city will be impossible to forget.

After dinner, Kim and I stroll through Leoplodstat. We stumble upon an immaculate garden.

Yes, the sky really is that magnificent. But in the background lurks something sinister: a large cylindrical structure that was built to house weapons for the Nazis.

We’ll spend the next day gallivanting around Vienna, marveling at the ornate architecture and incredible wealth speckled across the city’s surface. We’ll see the rare paintings of Egon Schiele exhibited at the Leopold Museum, and drink beer on the Danube Canal. But there is a troubling darkness that bubbles beneath the city’s white and gold façade. Here, as in Rijeka, there is a conscious fear that at any moment, things might go back to the way they were.

In some places, art acts as a grave and necessary reminder.

No one here cares that today is Independence Day in the U.S. On our way back to Rijeka, I hear one of the company members say that Trump is “an endless source of comedy.” But today, I am not laughing.

Still, we appreciate the time we’ve had to rest and recharge. When we return to Rijeka, we move into our new apartment with a view of the sea (not to mention WiFi, at long last). We’re christening the new digs by meticulously planning our upcoming ten days of rehearsal. After such a blissful escape, switching gears so suddenly is proving more difficult than we anticipated.

We’re hoping that everyone gets along. Coming from Columbia, we’re used to working with whatever resources and actors we can get. But we don’t know enough about our technical specs to plan for any serious light or sound elements, which is making the planning process a serious challenge. Right now all we know is that for this week we have four walls and the people in the room. 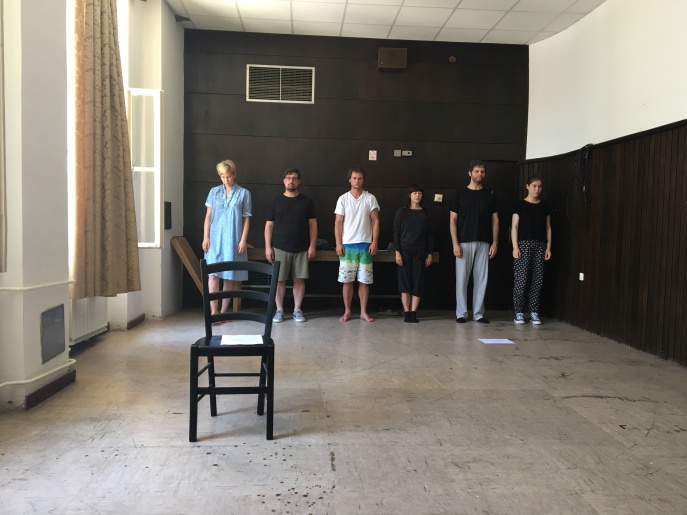 Lucky for us, we’re used to minimalist constraints. We spend the morning getting to know each other. We immediately sense a warm and generous energy in the group. People are focused and ready to jump into the void–they seem as excited as we are to make shots in the dark.

We start the morning off with some basic Viewpoints exercises. From these exercises, we can already begin to see our story and characters emerge. The research materials we’ve been steeping ourselves in for weeks are suddenly taking new life in unexpected ways.

We’re cautious about counting chickens, but by the end of today’s rehearsal, we felt confident that, after tomorrow, we will have found a solid, functional shell. From here on out, we’ll be using every tool we have to crack it open.